By the beginning of 2011, following an 11 year long search, we finally had our singer in place. Braun had moved over from Rome to join the band and record our debut album. At the time we didn't have a name for the album but we did have a permanent studio, all the equipment that we needed and the 3 of us living in London.

Dave and I had full time jobs which meant travelling to the studio after work in order to write and record. This in itself was a fairly difficult thing to do as my commute to and from the studio was 90 minutes each way.

This is as good a place as any to say that the full, recently remixed and remastered version of Telos is available as a free download from our site HERE

The recording equipment that we had at the time was:
This was certainly not a high end recording setup but it was enough to get the tracks recorded and released. Putting the tracks out there was our main focus as in the 11 year history of the band, we'd not released an album.

In early February Braun began working on the tracks that he had not heard or written any lyrics or vocals for. This process did not take a long time and by the beginning of April, all the vocal parts were written including lyrics. In February, we were simultaneously working on the drum sound and recording the drum parts. For more information and photos of my Telos kit, look HERE and HERE. Below are a few pictures of the drum kit set up in our studio for the recording of Telos followed by 2 photos of the live room: 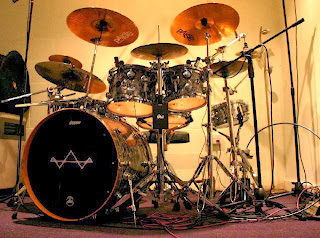 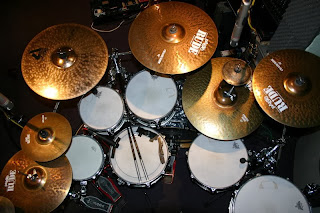 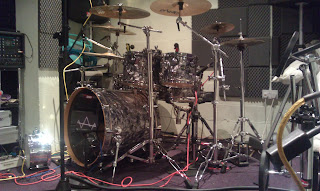 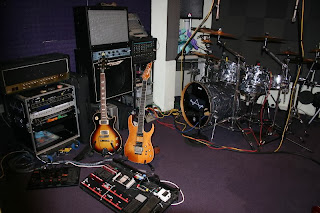 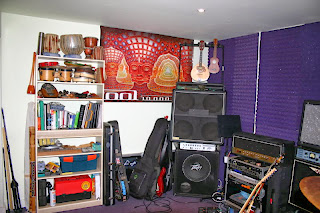 For more information on our live room in general, look HERE

With the close proximity of the walls to the kit and the fairly low quality of our kit mics and mixing desk, we were never going to get a truly amazing drum kit sound but we did the best possible under the circumstances. We were also limited by our lack of experience with producing a full album in general.

Once the the first few drum tracks were recorded, in mid February, we started tracking guitar. We set up the Neumann TLM 103, SM57 and C1000 on the Marshall cabinet and had the mics close to the speaker cones. We also added another mic but ended up not using it. The guitar tracks were double tracked and hard panned left and right. Here's a couple of pictures of the guitar setup but for far more information on the rig including it's subsequent evolution, see THIS THREAD on our forum: 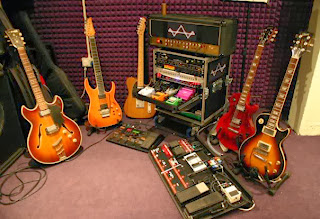 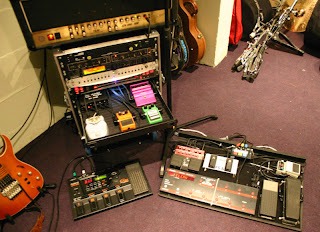 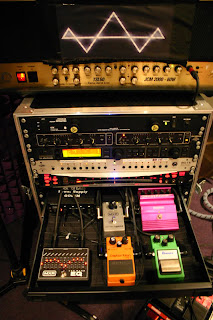 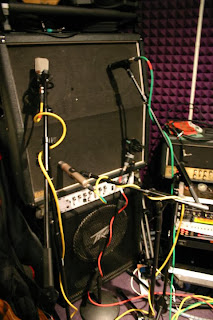 Here's a photo of the guitar parts being worked out: 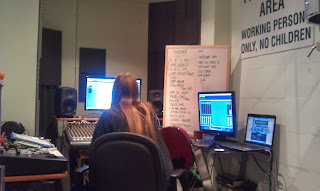 Once all the guitar had been recorded, we then moved on to the vocals which were ready to go. We started Vocal recording at the beginning of April 2011. Vocal recording progressed fairly quickly and by mid April we had all the vocals recorded. Dave was also working with Braun throughout this time to write and record the bass parts.

The bass was written and recorded by the end of April. We used a Steinberger bass guitar through a Genz Benz head and Dr Bass Cabinet. We miked the cabinet with a AKG D112 and Shure SM57 and then also recorded the DI out of the bass head. For more information on our bass setup for Telos, look HERE

We all feel that our general bass setup, including the fact that we did not have a bass player in place, was the weakest aspect of Telos. The way that we originally mixed the bass added to our dissatisfaction in this area and is what ultimately led us to remaster the album in 2013.

By May 2011, we had all of parts recorded and were ready to begin mixing. The mixing process involved hours of listening and referencing. We used our Genelec 8030 monitors as well as some in ear monitors and Sennheiser HD600's for referencing. I won't go into detail with regard to what we did in the mixing process as it's probably too technical but here's a photo of this phase of the album's creation: 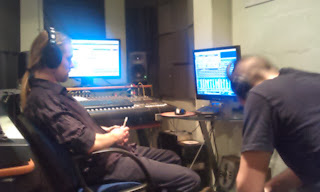 Below is a photo of our control (mixing) room but for more information, look HERE: 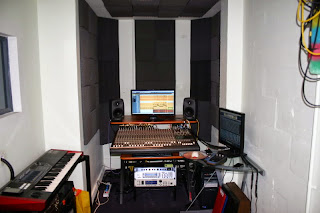 We were very happy to finally have something available for people to download and listen to. In 2013, we remastered the album to take advantage of our increased know how in the mixing and mastering area, to take advantage of a lot of new equipment that we have purchased and in order to gain experience in the run up to mixing and releasing our next album.

Looking back on the recording and release of Telos, I would say that in general it was hard work for all of us which required significant sacrifices in many areas of our lives. It's certainly been worth the effort though considering the fan base that it's built for us and the feedback that we've received on the album over the past couple of years.

Once again, HERE's the link for the free download of the remastered version of Telos. Following this remaster, we're all happy with Telos and feel that it's a great start for us although we're all set to release a new album in 2014 which pushes much further in every respect. That is afterall the aim, continuously write and release better material and evolve as a band over time. Telos is a great first step which marks the starting point for our officially released material.
Posted by Unknown at 11:47

Learn how to get a song on itunes at ReverbNation.com